I picked this movie for Shocktober because (1) I own it and it’s therefore part of my Watch All the Things marathon, (2) It has a reputation as a semi-horror film, and (3) I really love some of Peter Weir’s later work, particularly Master and Commander and The Truman Show. What’s so surprising, then, about this movie is that it’s both scarier and way less of a horror film than I expected, and it is quite different from his testosterone fueled films that I admire so much. Picnic at Hanging Rock is a strange outback-gothic film that I can see revisiting as I get older and wiser.

When three girls and their teacher disappear while on an afternoon picnic at a strange rock formation, their classmates, caretakers, and fellow-townspeople start to go a little crazy in their attempts to deal with the situation. What secrets did the girls share with each other? What danger did some young guys (one upper class and one lower) pose to them? Did Australia’s notoriously dangerous wildlife have anything to do with their disappearance? And what happens to an ordered society when something unexplainable happens? The last is the only question that is answered in the film. Fans of The Leftovers will see quite a bit of similarity here, with a bit more emphasis in this film on the environmental horror than the show’s suburban terror. The scenes before the girls disappear are filled with a kind of quiet tension that slowly tightens as they venture further into the wilderness. By the time they walk off screen, the bass is blasting and the geography is discombobulating. There’s an overwhelming sense of something happening, but the film never explains what that thing is. 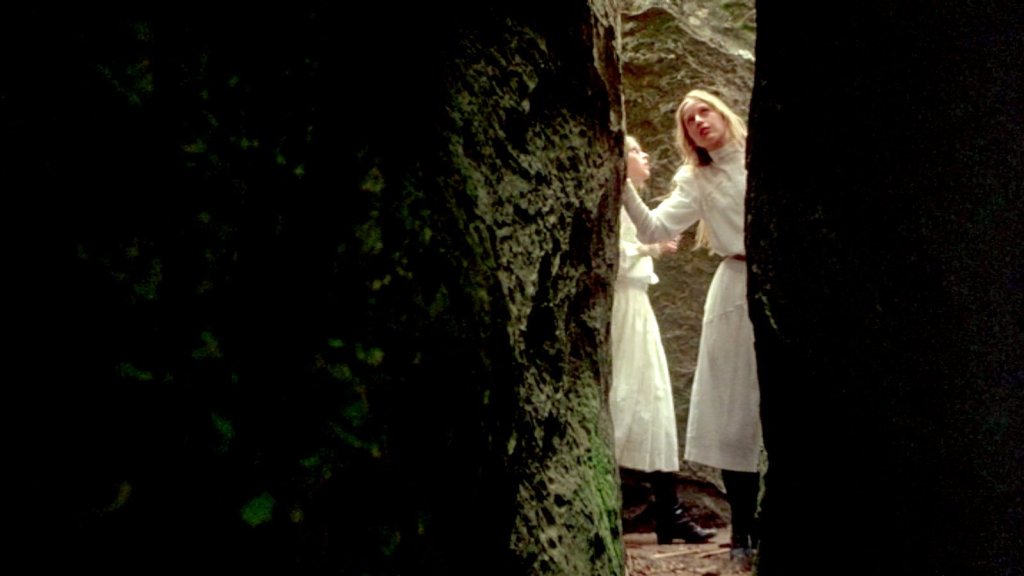 What does happen is an exploration of the societal decay that occurs when order is disrupted. There are a few instances of the girls seeing other people out on a similar picnic before they disappear. These people are almost always trying to live their regular lives out in the harsh wilderness. They’ll have big heavy furniture and opulent food. Here Weir, working off a script adapted from Joan Lindsay’s novel of the same name, highlights the absurdity of trying to live in such an inhospitable place. Even the distinctions between social classes break down in the outback. This absurdity permeates the ordered boarding school and town and soon draconian punishments abound, among foolish rescue expeditions and a lot of alcohol consumption.

There are no jump scares in Picnic at Hanging Rock, not one frightening image in the film. But there is a profound sense of atmosphere and uncanniness. All it takes is a push to knock everything out of whack. Although there aren’t any castles or ghosts, this is an Australian Outback gothic of the highest degree. It’s not as heightened as something like Wake in Fright, but it’s just as compelling.