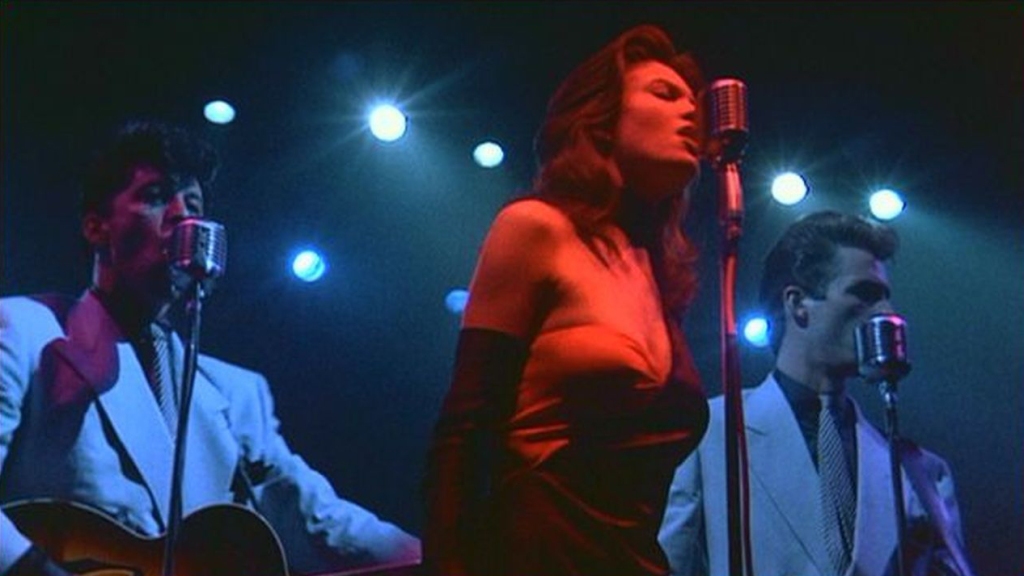 I’ve seen Streets of Fire before. I watched it in 2014 and it was my 33rd favorite discovery of the year. Not great, but not bad either. I saw it got a Shout Factor release since then so I picked it up, remembering the amazing opening scene and the overall vibe fondly. Turns out my memories are pretty reliable. I liked Streets of Fire even more this time around, though my problems with it remain.

Let’s start at that beginning. We get a bit of text on a black screen first telling us that this is “A Rock & Roll Fable” then doing the best scene setting by text in a movie that I can remember: “Another Time/Another Place…”. Already we know what we’re getting into. The opening shots of people in 50s-ish outfits on a street set decorated to look like 1955 and 1985 had a baby that they then neglected set to music that you hear when I say “80s” to you. It’s amazing how quickly Walter Hill, co-writer and director, sets the mood of the film. Then you get people filing into a concert venue where Ellen Aim (Diane Lane) and the Attackers will soon take the stage and rock your socks off. During their electric performance of “Nowhere Fast,” one of the best musical songs there is, a group of shadowy guys comes into the venue from the street where they parked their motorcycles. At the end of the song a light shines on the leader’s face and it’s Willem Dafoe playing Raven Shaddock, who kidnaps Ellen and busts up the joint before going back to his home base. A diner owner writes a letter to her brother, Tom Cody (Michael Paré) who soon teams up with a down-on-her-luck veteran, McCoy (Amy Madigan) to get Ellen, his ex-girlfriend, back.

It’s kind of a weird setup, especially when you consider the logistics of the letter that Cody’s sister writes him and the span of time that doesn’t seem to pass between her writing and his arrival. But because you’ve already gone with the strange time-slippage in the sets and dialogue, the time jump that simultaneously does and doesn’t happen (Ellen seems to have been kidnapped for maybe an hour later in the film) doesn’t bother much. Later, when the movie continues to ask you to buy stuff happening that maybe shouldn’t make much sense, you do because it has already shown you that this is set in a world of its own where the normal rules don’t really apply. What matters more is the feeling of something, the pulse-pounding music of “Nowhere Fast” is the life-blood of the film that infiltrates the score and pushes the characters along. At least, it does for the first half.

Ellen is rescued surprisingly early in the film, and after that happens (with a standoff and explosions and a lot of motorcyclists popping wheelies for no discernable reason), the movie loses some momentum on the trip back to the street where it started. It is enlivened a little by the addition of a band of black doo-wop singers whose bus is commandeered by the rescuers and who add a bit of new energy to the one scene that they’re in before the conclusion. After everybody arrives home safely, we have to sit around for what feels like an eternity but is probably only about 10 minutes. Then there’s a big fight between Raven and Cody involving sledgehammers and ridiculous outfits and a final few musical numbers and by the end the movie has regained some of the verve that it had when it began but not all of it.

I really wish that back half was as good as the opening because if it was this would probably be among my favorite films. There’s something simultaneously lived-in and wildly unreal about this movie that appeals to me. It, like Brigadoon, takes the fantasy inherent to musicals and turns that fantasy into the premise of the rest of the film. In fact, Streets of Fire might have been better served to have even more musical numbers in it. All of the performances here happen on a stage and when there isn’t a logical reason for a stage-show to happen, the songs exit the picture. Even a ballad would energize the second half of the movie before the battle a little. Streets of Fire is an amazing movie for about 60% of its runtime. That other 40%, though, is boring enough to knock the whole proceedings down a few pegs.