I was going to do all of Vigo’s shorts, which would have added Zéro de conduit to this post, but I realized that the Vigo’s first two shorts, À propos de Nice (1930) and Taris, roi de l’eau (1931), were of a different genre than that film, which is a fictional story about life in a boarding school. These two films are documentary shorts, though as I’ll go into a little later, they stretch the boundaries of that genre a little bit. First, a bit of background. À propos de Nice is a city symphony, a subgenre of film that takes a look at the city it is documenting without utilizing a traditional narrative (usually), made famous by Man with a Movie Camera. In this case, Jean Vigo and his photographer, Boris Kaufman, filmed the sights of Nice, France, including beach scenes, sporting activities, a parade, and the working men and women who contrast with the rich leisure-seekers. Meanwhile, Taris, roi de l’eau is a shorter film, commissioned to celebrate the Olympic swimmer Jean Taris’s abilities and prowess. I noticed between these two films with a total runtime of 35 minutes six interesting techniques Vigo used to innovate the documentary form and put his anarchist worldview on film.

As has become typical of city symphonies and fiction film alike, Vigo begins À propos de Nice with a series of aerial establishing shots and then cuts to ground level shots that we then understand to be small parts of the larger tapestry that is the city as a whole. In this way, he anatomizes, or dissects, the city to reveal not only the overall impression of Nice but also its constituent parts. But he doesn’t stop there! He further anatomizes the different tableaux that capture his attention and sees what the different parts of them mean on their own and with each other. Take the parade, which sees the people of France both participating and spectating in the frenetic energy that such a creative, if empty, display generates. The participants are pelted by flowers (which we also see getting pick in shots spliced into the parade sequence) and I detected both joy and annoyance upon their faces when one surprised them. By anatomizing the city and then the smaller scenes within it as he does, Vigo ensures that no detail goes unnoticed, and every detail is given roughly even weight so that a boy from the poorer area of town with a deformed face staring directly into camera feels as important as the rich older women who marvel at the parade and the young women who dance in slow motion on an elevated platform. But Vigo anatomizes even more in Taris, as he first allows us to take in Taris’s fine swimming form then uses close-ups and slow motion to allow us to see each body part’s role in propelling the champion through the water. We see his legs kick in the water without viewing the rest of his body, we see his back as he flexes and pulls himself through the slowly splashing water in gorgeous slow motion. These techniques allow us to understand that the parts make up the whole and that each part does something important. In both films, Vigo uses anatomization and slow motion to not only show us the details that constitute a whole but also to ensure that we care about each detail as much as the next. What does the leg kicking matter if it is not attached to a back that is also working to move the body? What good is the parade when the poor must toil during it?

It’s nice to think we’re in control of our bodies, and that we decide every motion we make, but Jean Vigo doesn’t seem to think along these lines. Instead, he marvels at the little bits of ourselves that we can’t control. He sees those dancing women and shows us their jiggling legs in slow motion as they do the can-can. He sees Taris’s underwater flips as he reaches the end of the pool not only for their efficiency but also for the weird way we look when we do strange motions. He sees, in other words, the way Taris’s package kinda flops around in his speedo as he does his maneuvers. Don’t ever let anybody say that anarchists have no sense of humor. Vigo pokes us and reminds us that our bodies may belong to us but we cannot fully control them, even if we’re Olympic athletes.

There’s a striking shot in what I’m going to call the architectural sequence of Nice that switches the way Vigo has been portraying the buildings that make up the city. Earlier in the sequence, Vigo focuses on the exteriors of the buildings that form a busy alleyway. There are women cleaning clothes in a public basin, and clothes hanging up to dry outside windows and Vigo and Kaufman film the latter somewhat obliquely, showing the dangling fabrics from as close to head-on as they can from the street, exposing the film so that we can make out the details of the clothes and the stucco that forms the exterior of the building. But in one shot they instead expose for the sky such that the rest of the picture, those same buildings and clothes, become almost silhouettes while the sky, presumably a bright blue on the day but just a lighter shade of gray on film, becomes the center of attention. A similar effect happens in Taris during the leg kicking shot because the legs take up only the very top of the frame while the rest is left open to record the clear water. Vigo uses negative space to remind us that things are only things in relation to nothing. Of course, those nothings, the sky and the swimming pool water, aren’t really nothing and so we are also reminded that the world we inhabit is crucial to our existence. Buildings keep out the heat of a summer’s day and water provides a medium in which a person can do something they are unable to do in the air, a point Vigo makes explicit when he shows a swimmer doing the motions of swimming while balanced on a pedestal out of the water, accomplishing nothing.

I’ve already talked a little about some ways that Vigo goes beyond just pointing a camera at a scene and letting the film play out in front of him. He uses slow motion to allow his viewers to see the details of a scene more clearly, but he also invents scenes entirely, a technique that blurs the boundaries between fact and fiction. At the end of Taris, Vigo has the swimmer stand still next to the pool in his speedo. Then, through the use of a fade, he shows Taris in the same spot but clothed in an overcoat and hat that seem to have appeared on him as if by magic. Then in another bit of inventive trickery involving a crossfade, Vigo has him walk out across the water, working some additional magic after the show he put on in the pool. These closing moments ask us to think about how silly the idea of the celebrity athlete is, especially coming after such a celebratory film. In Nice, Vigo uses a model posed in a chair to show off summer fashions through a series of fades between each outfit, concluding in a nude version of the same pose. Both of these examples continue his fascination with the human body and turn documentary into something more expressive and fun.

Not content to dive deeply into a scene to allow us to examine it in full, Vigo also reverses shots to give us a chance to see the action contained therein again. In one instance in Taris, the film where Vigo flexes these particular muscles, we see the Olympian dive into the water and the shloop (I’d guess that’s what it sounds like) back up onto dry land before diving again in an exact replica of the first time. This repeats again as Taris narrates how one should be almost parallel to the water to achieve maximum efficiency. Vigo breaks the rules of time and space to let us study one action over and over, and if that isn’t anarchist I don’t know what is. 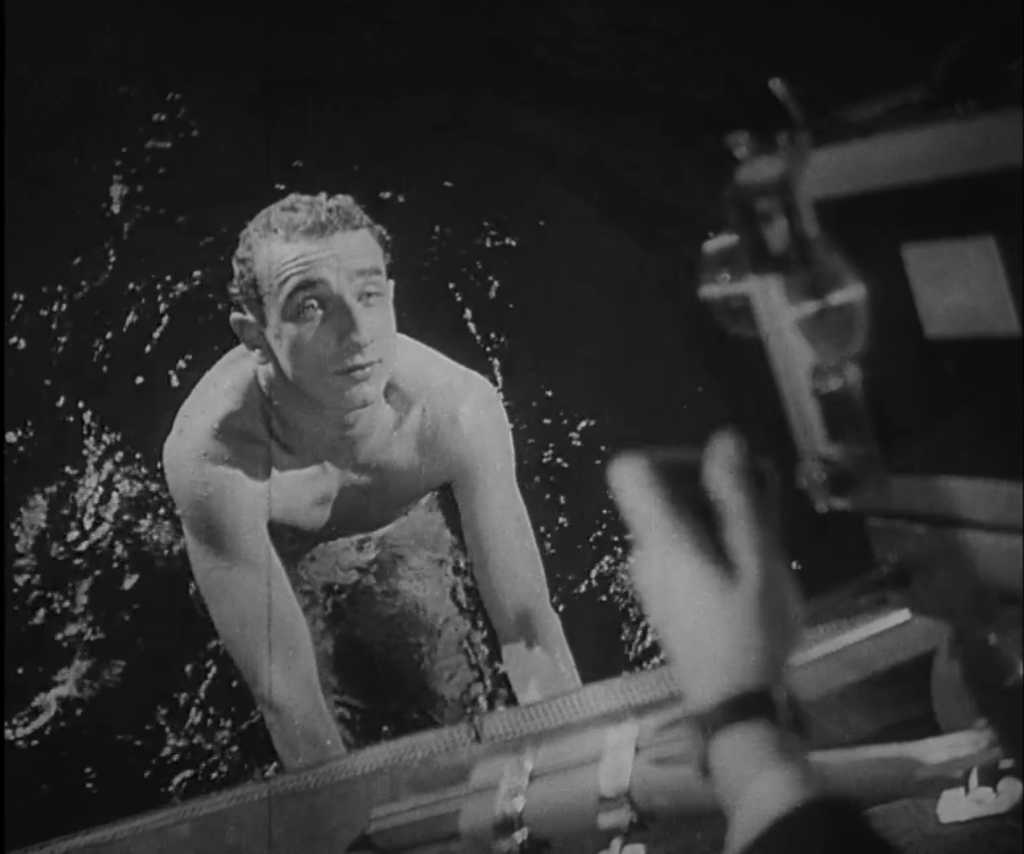 Perhaps because Vigo and Kaufman shot Nice on leftover ends of film, the movie moves between one shot and the next at a breakneck pace. Only a few shots play for more than a second or two at a time, though Vigo does return to shots often. These quick cuts make the 25 minutes fly by, but they also turn the film into something that only fully registers subconsciously. The images flash by so quickly that the eyes don’t have time to take in those details on an intellectual level and therefore I started to build an emotional picture out of the montage rather than something concrete. It’s a remarkable technique that eschews the norms of cinema for a style that has its own way of seeing the world. The city becomes not a destination but a way of thinking, of understanding the juxtapositions between rich and poor, clean and dirty, fun and sad, quick and slow.

Speaking to the Groupement des Spectateurs d’Avant-Garde, Vigo claimed that “[i]n [À propos de Nice], by showing certain basic aspects of a city, a way of life is put on trial. The last gasps of a society so lost in its escapism that it sickens you and makes you sympathetic to a revolutionary solution.” Vigo’s goals were explicitly revolutionary and his formal techniques were a way of communicating that idea without using words. Taris is less explicitly revolutionary, but it still finds Vigo willing to use those same techniques to interrogate the way people move and how we think about athletic celebrity. His films are like nothing else I’ve seen and that’s exciting to find 30 years into my life on earth. Funnily enough, Vigo’s career started about 30 years into cinema’s history, and influenced those who came after him. You can see bits and pieces of both of these films in movies today whether it is in the quick cuts in action movies or the slow motion dancing in music videos.